My video game comfort zones are graphic adventures and RPGs. So when I committed to the Bitsy Jam, I figured I might as well stick to what I'm familiar with. Object-based puzzles and fetch quests are second nature to me, as both a gamer and a hobbyist dev.

When I first started exploring Bitsy, I came across games like The Bazaar and After Midnight, both of which use conditional dialog variables to create nested "give X, get Y" fetch quests.

As it is, much of Bitsy's intro documentation (including Claire Morley's enthusiastic Tutorial) do not mention the steps for setting conditional variables.

For the most part, it was easy enough to figure out via trial and error. On paper, the quickest method is to use the Variables tab in the Inventory toolbar, then set conditions in the Dialog toolbar using the drop-down menu options.

However, I was getting inconsistent results that way, so I ended up coding it all by hand.

I coded the variables directly within the Dialog box, like so: 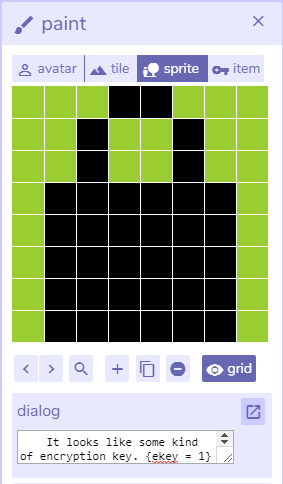 Then I set custom conditions in the related Dialog boxes: 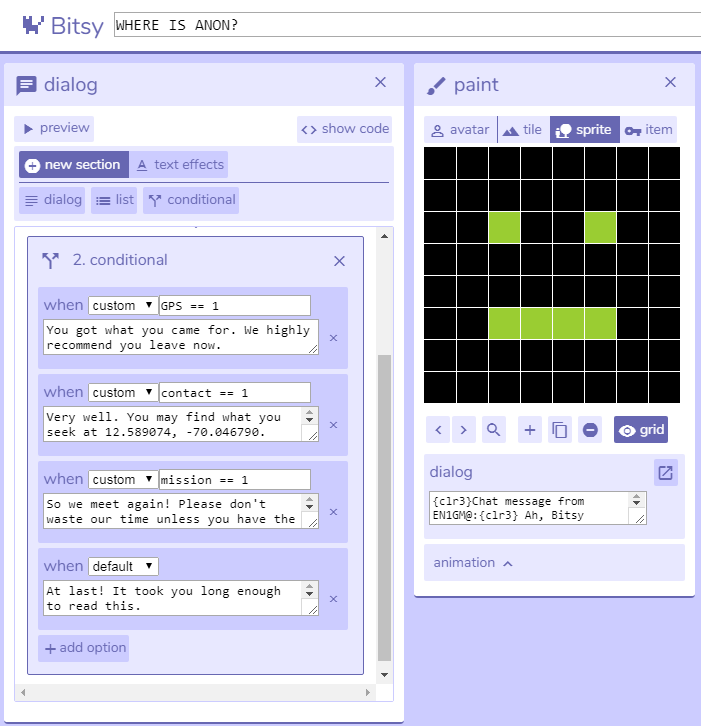 I owe a massive debt of gratitude to mogibear, whose dev comments on The Bazaar helped me figure out how to manage the 'virtual inventory' of non-physical 'items' in my game (stuff like passwords and contacts' names).

Sprvrn also had some very useful comments about using variables in dialog.

Now that it's all over, I have to second-guess my decision to use so many variables at all.

I say this because plenty of my favorite Bitsy games (off the top of my head: Diplomat Simulator, Cat's Out Of The Bag!, No Snow, and Penroses) barely use any variables, or at least they don't appear to. The magic of the experience comes from inventive room designs, unique exit transitions, and effective use of color palettes.

Indeed, perhaps I've using Bitsy the wrong way (or at least not taking advantage of its core appeal as a tool).

In any case, what's done is done. At least now I have a clearer idea about which elements to focus on next time. 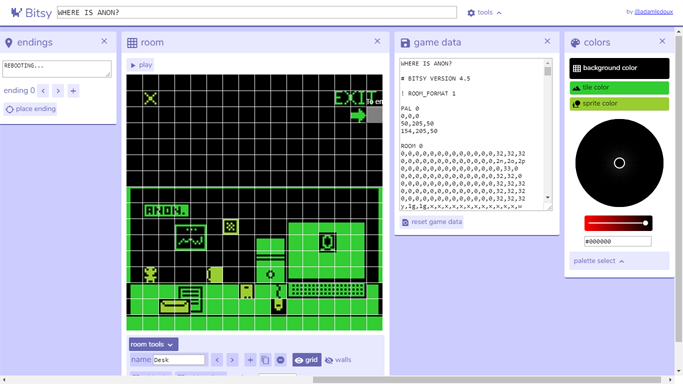 A short mystery about corporate espionage

hey!  thanks for giving my game a name check.  i too am interested in creating rpg/adventure type games but was a little confused as to how exactly the objects/variables/dialogues work, this article will be a massive help next time.  cheers!

This is awesome and so interesting! Thanks for mentioning my tutorial and one of my games too ^_^ you have reminded me that I must really update my tutorial haha, at the time of writing it variables didn't exist in bitsy, I think it was a couple of months later :) it's really cool to see the progression of bitsy games with newer features and what people can do with them, I'm always so inspired by the games people make :D